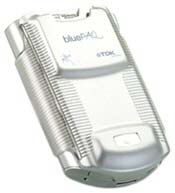 TDK Systems has always been in front when it comes to connectivity, and has a broad range of accessory products for both mobile and stationary products adding all kinds of connectivity. Bluetooth is the company’s latest venture, and after launching a PCMCIA Type II Bluetooth card, a USB Bluetooth accessory and Bluetooth sleds for the Palm V and m500 series, the turn has come to the bluePAQ – an add-on jacket for Compaq’s iPAQ H3000 series Pocket PCs.

TDK’s bluePAQ clips on to the Compaq iPAQ as a clear jacket, and all Bluetooth drivers reside in the jacket, which allows automatic loading every time it is fitted to the iPAQ – a solution which removes many of the immediate interoperability problems that users often face. Additionally, the jacket sports a CompactFlash Type II slot, offering users to use CF expansion cards of all kinds in addition to the built-in Bluetooth functionality.

The bluePAQ is the latest product in TDK Systems’ “Go Blue” range, weighs less than two ounces and bears a suggested retail price of $239.99 USD.

“We believe Bluetooth should be a business solution, not just another technology,” said Nick Hunn, managing director at TDK Systems. “The 78 million remote wireless users in the United States crave the promise that Bluetooth offers. With our extensive line of Bluetooth devices, users now have the power to instantaneously connect with colleagues, browse the Internet and access documents without wires and regardless of their location,” he added.

Although the bluePAQ could not be found in the Bluetooth SIG’s list over qualified products, TDK said it had been working with many other major hardware and software developers, associated with the Bluetooth Special Interest Group (SIG), to ensure wireless compatibility amongst mobile phones, PDAs, printers and across the relevant communications protocols, such as the GPRS network.