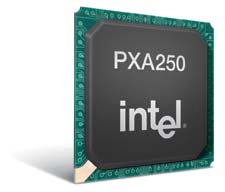 The added performance and power savings from the new Intel processors come at a time when significant amounts of data are beginning to be processed on wireless devices. According to Cahners In-Stat/MDR, of the 400 million handsets sold worldwide in 2001, only about two to three percent are capable of processing large amounts of information. By 2005, the analyst firm believes that more than 50 percent of the 900 million cellular phones sold will be data enabled.

“Consumers today want to access the Internet, share information and stay connected wherever they go, and that puts significant processing demands on their cell phones and personal digital assistants (PDAs),” said Peter Green, general manager of Intel’s Handheld Computing Division. “These demands will only increase over time. The new Intel XScale microarchitecture-based processors deliver longer battery life and increased computing power for accessing the Internet with handheld communications and telematics devices today, and well into the future.”

Many of today’s wireless and handheld devices sacrifice processing horsepower in order to maximize battery life. This trade-off does not impact the ability to manage simple personal information such as calendars and phone numbers. However, processors used in many current handheld products are unable to power popular compute-intensive consumer applications such as mobile digital music, Internet access, color video and gaming.

The new Intel PXA250 and Intel PXA210 applications processors allow makers of wireless communications devices to take the next step in high-performance and low-power wireless handheld computing technology. Products using the new processors are expected to be available to consumers by mid-2002.

These new processors feature architectural enhancements including support for the new Turbo mode technology. Turbo mode enables the processor to scale the performance as high or as low as necessary in a single clock cycle, which helps conserve battery life while still providing the necessary boosts in performance. In addition, the new micro-power management features for these devices allow the new processors to potentially use less than half the power at the same performance levels of today’s Intel StrongARM SA-1110 applications processor.

To increase multimedia efficiency and performance, Intel also added Intel® Media Processing Technology. It is designed to work specifically with the device’s audio, video and gaming applications to increase the number of frames per second in videos, improve sound quality and give advanced graphical effects.

In addition, more than 200 independent software vendors are introducing versions of their popular multimedia software applications in support of the new Intel processors. Adobe, Macromedia, PacketVideo, RealNetworks, Inc., and other companies have optimized their software to provide Intel-powered devices with rich audio, video and gaming capabilities.