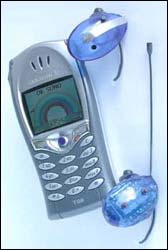 The Bluetooth™ headset is designed to fit any right ear. The light and durable material has been designed for military standards and allows the user to wear the headset for very long periods of time.

Still in development, the BT headset, named BlueSpoon, is exceptionally small and doesn’t make use of a boom solution like many other headsets. Instead, the BlueSpoon works on the concept of picking up sound waves transmitted through a person’s jawbone using a noice-cancelling microphone patented by the company. An add-on high-quality boom microphone will however be available for users who prefer the conventional approach.

The headset supports the Headset Profile in version 1.1 of the Bluetooth specification, and its 135 mAh rechargeable Lithium-Ion Polymer battery should provide approximately 7-8 hours of talk time, all while measuring only 35 mm x 22 mm x 14 mm. The headset will initially be available only with a charging cradle that requires a wall adapter, but a USB accessory will be available later allowing the headset to be charged directly from a laptop or any other device with a USB port.

The company began taking pre-orders for the device as early as during a preview of the headset at COMDEX in 2001, but expects to have fulfilled those orders in June upon which the company will begin accepting new orders. Jon-Hein Magnussen with NEXTLINK.TO said the company expected to be able to sell the BlueSpoon for around $300 USD at its official introduction in June, with the price being lowered as components grow cheaper and hopefully go all the way down to around $200 USD.