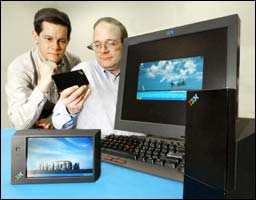 IBM Research has invented a prototype 9-ounce portable computing device that could pave the way for a new set of functionality in the handheld space.

Codenamed “Meta Pad”, the device is about the size of a ¾ inch thick stack of 3-by-5 index cards, and is part of IBM’s research to explore how humans interact with computers and define the technologies needed for future pervasive devices.

While IBM may license exploratory Meta Pad technologies to other companies, it has no plans to make or market the device. IBM built the Meta Pad to research and develop technologies that will go into and help manage future computing devices.

To make Meta Pad so small, IBM researchers pulled the power supply, display and I/O connectors out of the computer core — leaving processor, memory, data and applications. Components removed from the machine become accessories, allowing the individual users to decide how they want to use the device — it can be transformed into a handheld, desktop, laptop, tablet or wearable computer in seconds, without having to be rebooted.

It is unique from today’s handhelds because all of a user’s data and applications remain inside the core, eliminating the need for “synching” among multiple devices. In addition, it can run multiple operating systems that share the same data, allowing users to run any application they want.

“This device is a radical experiment in form factor and is furthering our understanding of how humans can better interact with their information,” said Ken Ocheltree, lead engineer on the “Meta Pad” project, IBM Research.

“The ‘Meta Pad’ project is part of our overall strategy in the pervasive space: building the technology inside computing devices, and building and managing the infrastructure that will simplify the unthinkable task of connecting billions of devices to billions of things,” added Ocheltree.

The components pulled from the machine become accessories, and the individual users decide how they want to use their portable device. For example they could:

IBM has also incorporated its advanced speech technologies and ink recognition software to further improve the interface to the Meta Pad.

Another potential application of Meta Pad is in the super dense server space, offering an alternate way to build servers. By plugging many of these small devices into a rack system, you can get high-performance in a very small form factor, making it easier and more affordable for individuals to have their own personal server.

Ken Ocheltree will show the device next week at the DEMO conference in Phoenix.