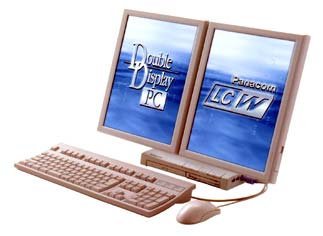 Matsushita Electric Industrial Co., Ltd. introduced on Jan. 23 a desktop PC called Panacom LC/W with two 15-inch (1,024 x 768 dots) LCD monitors arranged side by side. The LCD screens can be arranged so that they can be used either in a portrait or a landscape form. The new model will be put on sale on March 8 and the retail price through direct marketing is $2000 USD.

Also, Matsushita is introducing a single-screen model (price starts from 193,000 yen) and that model can be upgraded to the dual-screen type.