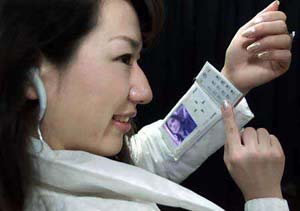 A Pioneer Corp employee shows the latest in Japanese streetwear–a hybrid of fashion and technology that has its roots in ‘wearable PCs.’ With the white jacket under development, Japanese electronics maker Pioneer Corp aims to showcase more functions to the heat-proof, fabric-like display embedded on the sleeve.

A map of the area lights up. She sifts through information on places to eat and shop, tapping a key pad woven into her cuff, as music plays from headphones wired through her collar.

Her padded white jacket reflects the latest in Japanese streetware — a hybrid of fashion and technology that has its roots in a concept that has never quite worked: the “wearable PC”.

Although the jacket is still under development and is not yet commercially available, fusing high-tech accessories with clothing is seen as an inevitable step in Japan’s fast-moving fashion industry.

Sone taught at Tokyo’s Bunka Fashion College until last year when she began spearheading a 30-million-yen ($222,500) project to develop high-tech fashion with electronics companies like Pioneer.

She admits it’s a challenge but says Japan’s twin obsessions with fashion and technology could produce a fertile market.

Attempts so far at the “wearable PC” have been fashion flops, often built by computer engineers focused more on chips than hips and confined to factories or university laboratories.

Sone, a 64-year-old designer with bright blue dyed hair, wants the concept to gain mass appeal. She’s even coined a new term for it: “media fashion”.

“Tokyo is the only quirky market for fun fashion right now,” she says.

Her biggest financial backer is the government of Gifu prefecture of central Japan, which hopes “media fashion” can help revive its once-booming garment towns.

She is also hoping for support for the national government.

A key challenge is to develop a water-proof fabric-like display that can be folded up without losing its functionality.

To that end, Pioneer Corp sees Sone’s project as an outlet for 10 years of research on ultra-thin displays that are flexible enough to be embedded in clothing.

“By then, we want to add more functions like music and cell phones to the jacket,” said Pioneer’s industrial designer, Naoki Harasawa, referring to the jacket worn by Taniuchi.

“To get rid of cords and weight, we have to work on such themes as wireless technology that can transfer loads of data and batteries that can last longer,” he said.

“The next challenge is washable displays.”

Marketing will also be a challenge for “wearable PCs” because of their expected high price tag.

Electronics maker Hitachi Ltd 6501.T plans to launch what it describes as “the world’s first consumer wearable PC” next month at a price of 300,000 yen ($2,254), initially for industrial use in factories.

Hitachi’s “Wearable Internet Appliance” includes an 80 gram (2.8 ounce) head-mounted computer screen that includes a lense covering one eye. This is wired to a battery-operated mini-PC that can be clipped onto a belt or hidden in a pocket.

It’s not exactly couture fashion. But U.S.-based wearable PC pioneer Xybernaut Co XYBR.O, which owns patents for some Hitachi product, has already started marketing it for consumers in the United States.

The aim is to give workers more flexibility while assembling products. To check a manual or the Internet, information can be accessed through a wireless local area network. The mini-PC itself can be manipulated through a small hand-held device.

“I think people would wear it if Hitachi gets around to marketing it as a fashion statement,” said Yoshimochi Obata, a keen fashion watcher at Tokyo-based Web Style Research Institute.

But a “wearable PC” with appeal for the masses would need to include both a portable music player and an Internet-equipped mobile phone while still looking stylish, he said.

Mobile phones are already a fashion statement in Japan.

NTT DoCoMo Inc’s “i-mode” phones have more than 30 million subscribers. Their improving ergonomics such as multi-colour displays have helped users warm up to a mind-boggling array of functions.

“Armed with mobility and a futuristic design, wearable PCs can be Japan’s next i-mode,” said Sone.