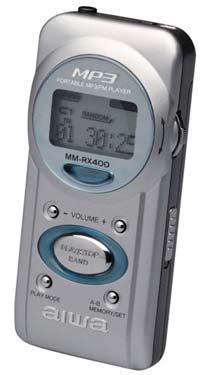 “The popularity of the MP3 format continues to grow, and as MP3 libraries expand, consumers are eager to have the same playback options they enjoy with CDs,” said Akio Imanishi, Senior Vice President, Marketing for AIWA AMERICA, INC. “We initially offered a car audio receiver and home DVD player with MP3 playback, and the positive response to those products led us to expand the line for 2001.”

In flash memory portables, AIWA will field four players this year. The new MM-RX400 includes a built-in AM/FM tuner and offers 64MB of memory, USB interface, SDMI compliance and supports both the MP3 and WMA music formats. It will be available in April at a suggested retail price of $400.00. It joins the recently introduced MM-VX200, which continues in the line. It is an SDMI-compliant player with 32MB of memory and an included 32MB memory card. It has a suggested retail price of $299.00.

In the summer, AIWA will expand its line-up with two new multi-codec flash memory players, one with a built-in AM/FM tuner. Model numbers and pricing will be announced at that time.

Other options for listening to MP3 files on the go include the AIWA XP-MP3 portable CD player that plays audio CDs and MP3-encoded CD-R/RW discs. It displays ID3 tags, and offers a fixed/variable bit rate (32k-320kbps), E.A.S.S. Plus on audio CD playback, three-point LED battery indicator, multi-bit dual D/A converter, rechargeable battery compatibility, and comes with a car kit that includes DC and cassette adapters. It will be available in February and carry a suggested retail price of $240.00.

In home audio products, AIWA is offering a system with a three-CD changer that will also play MP3-encoded CDs. The new XS-V30 sports AIWA’s new design concept, with a gently curved front panel and a motorized portion that conceals secondary controls. It also features AIWA’s exclusive new D.I.N.A. (Dynamic Integrated Neo Amplifier) technology that delivers greater dynamic range, increased headroom, lower distortion and a wider soundstage. Power output is 60 watts per channel, and in addition to the CD changer there’s an AM/FM digital synthesized tuner and a pair of two-way bass reflex speakers. The XS-V30 will be available in June at a suggested retail price of $350.00.

In car audio, AIWA is expanding its MP3 options, adding the new CDC-MP32 while continuing to offer the CDC-MP3, both of which offer playback of MP3-encoded CDs. The CDC-MP32 is a step-up model with an internal amplifier with a power output of 50