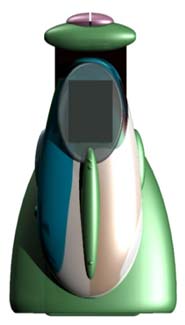 Zoopad Inc. has unveiled “Squish”, the first in a line of revolutionary new portable DAB (Digital Audio Broadcasting) products. This hand-held, battery operated unit is designed to have a unique appeal to consumers of all ages, with particular emphasis on teens. “Squish” delivers CD quality sound on the go plus a multiple line data display for song titles and other broadcast info. A one-touch button allows the consumer to store broadcast data. The unit also comes with a docking cradle which allows it connect with personal computers and integrate with the Internet. Squish affords a level of interactivity for the consumer which is ideal for e-commerce. Discussions with Radio Shack of Canada Limited are currently underway for Radio Shack to carry “Squish” in their stores across the nation.

Duff Roman, President of DRRI, said that “this sort of innovative DAB product, developed here in Canada, further reinforces Canada’s position as a world leader in digital radio. I am pleased that consumers of all ages will soon be able to carry the power of DAB- superb digital audio with the addition of value-added datacasting services- with them wherever they go”.

Currently, over 55 DAB stations have made service available to 10 million people in Vancouver, Toronto, Windsor, and Montreal. Ottawa is next in line to be added to the market list, with preparation underway for an airdate of early 2002. Planned expansion into all major corridors will add a series of markets including Hamilton, Kitchener, London, Guelph, Cornwall, Calgary, Red Deer, Edmonton, Quebec City, Trois Rivieres and Chilliwack.