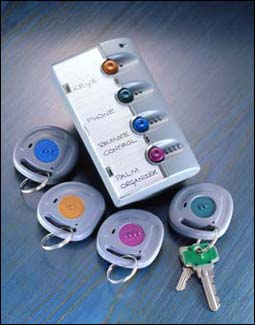 If your home telephone’s “PAGER” button is its most used and valued feature — helping locate a misplaced cordless handset — you’ll wonder how you ever lived without Sharper Image Design’s new, universal locater system, “Now You Can Find It!”

Attach one of the system’s four RF receiver beeper discs to any of those elusive objects that seem to wander off by themselves — keys, eyeglasses, TV remote, cell phone, PDA organizer and whatever else is forever getting misplaced. When an item is lost, just press its corresponding button on the system’s portable radio-frequency transmitter base. Carry the base from room to room and, whenever you get within 30 feet of the misplaced object, its attached disc will emit a loud series of beeps to lead you to the wayward item.

Each beeper disc secures to virtually any object — even a pet or a book! — with its keyring or with a double-sided adhesive pad; write a name for each object opposite its button on the base. The discs and buttons are color-coded; additionally, they’re coded with Braille-like bumps — one, two, three and four — so someone with limited vision who’s lost his or her eyeglasses can use the system.

The base comes with a magnetic mounting bracket that attaches to a metal surface, like a refrigerator or filing cabinet. The base unit itself will start beeping if it hasn’t been returned to the bracket within six minutes — so it won’t be misplaced! Base is 4 3/4″ x 2 3/4″ x 1 1/2″; it runs on 2 AA batteries (order separately). The thin receiver discs are less than 2″ across; each runs on a lithium coin-cell battery (included).