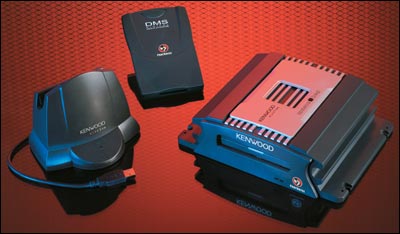 The Music Keg (Model KHD-CX910) is made up of three components: the Cradle; a computer desktop docking bay that holds the removable hard drive; the Cartridge or “DMS” Digital Media System removable hard drive; and the in-vehicle or trunk-mounted Music Keg. The Music Keg system employs a 10GB removable hard disk cartridge that, when placed in its USB docking cradle, allows fast downloading of music files from a PC or the Internet. Powered with technology by PhatNoise™, a California developer of digital media technologies that has won high praise from computer-savvy music fans, Kenwood is the only aftermarket audio company to offer PhatNoise technology in its 2002 line.

The Music Keg utilizes a desktop software music management system, making it fast and easy for users to rip MP3 or WMA files from CDs, download tracks to the hard drive cartridge, and set-up, edit, and access personal play lists. The Music Keg installs into a vehicle and is designed to work with all 1999 or later Kenwood in-dash receivers offering CD changer control and CD text capability.

“Kenwood is a leader in bringing mobile and home entertainment technologies to the market,” said Bob Law, vice president of sales and marketing. “The Music Keg is the mobile music system that resolves the technical and convenience issues of using hard drives in vehicles. The product has already been well received, and we expect high consumer demand.”

The Kenwood Excelon Music Keg is simple to use and intuitive for the consumer. Following these simple steps allows users to access thousands of MP3, WMA or hundreds of WAV music files from the vehicle.

2. Take the cartridge to the vehicle and insert it into the trunk-mounted Music Keg.

The Music Keg can be mounted virtually anywhere in a vehicle where a standard CD-changer would be, and connects to the receiver using standard changer protocols. The Music Keg has a 24-bit digital-to-analog converter and will display MP3 file names and ID3 tags on the receiver’s CD text display. An internal shock-absorbing suspension system ensures trouble-free playback.