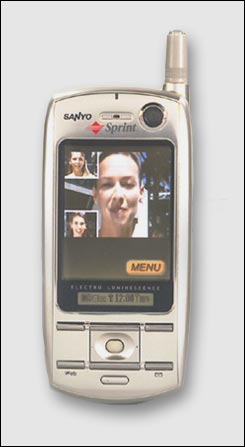 For the first time, Sprint, which operates the largest all-digital, all-PCS nationwide network and is the fastest-growing wireless carrier, and Sanyo Fisher Company (NYSE: SANYY) are giving a sneak peak at what futuristic Third-Generation (3G) Sprint PCS Phones hold for customers. A futuristic 3G Sprint PCS Phone by Sanyo featuring a 2.5-inch OLED display will be showcased this week at the Consumer Electronics Show during a keynote speech delivered by Sprint chairman and CEO, William T. Esrey.

This type of 3G phone is estimated to be available in 2003 and is ideal for demonstrating potential, future applications. For Sprint customers, 3G is expected to initially mean faster wireless data speeds and enhancements to their existing applications and services as well as create an opportunity for new applications including enhanced games, video and audio clips, high-speed Internet browsing, email with attachments, digital imaging and enhanced messaging.

OLED displays feature some of the most vivid colors and highest-quality image for viewing or playing enhanced 3G applications such as streaming video clips, games and digital imaging. The thin display features unlimited viewing angles, high brightness and a fast response. OLED displays are light in weight and are self-emitting, require no backlighting, which results in lower battery consumption. The OLED display is comprised of thin layers of individual carbon-based elements that emit light when electric current is passed through them.

“When people see this futuristic Sprint PCS Phone by Sanyo, the immediate reaction is ‘wow, now that’s 3G’. The OLED display makes an ideal screen for viewing demos of 3G applications such as multi-media, games and digital imaging,” said John Garcia, senior vice president of sales and distribution for Sprint’s wireless division. “The strong relationship between Sprint and Sanyo has produced a number of leading devices – including the first color screen in the U.S. and the thinnest phone – and this phone clearly continues that leading tradition.”

“It makes sense that when Sprint talks about future 3G technology and applications at the Consumer Electronics Show, Sanyo is there with the most advanced wireless phone. The Consumer Electronics Association has already recognized and awarded Sanyo and Sprint for achievements in innovation with the SCP-6000 and SCP-5150, and this new phone with its OLED display takes innovation to the next level for the next generation of wireless networks,” said Atsushi Kodera, group vice president, general manager of Sanyo Fisher Company’s Communications/Information Technology Division.

Esrey will unveil today in his CES keynote presentation, a day in the 3G life with a series of demonstrations to illustrate how customers will connect to family, friends, information and entertainment using enhanced applications, a faster network and wireless devices, like the 3G Sprint PCS Phone by Sanyo.