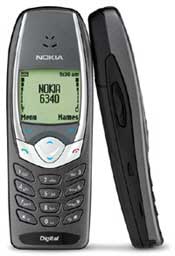 Nokia announced the new Nokia 6340 (GSM 1900MHz/TDMA 800/1900MHz/AMPS) wireless phone, the world’s first GAIT (GSM ANSI Interoperability Team) compliant handset, allowing users to roam between GSM, TDMA and analog networks. Along with the multiple network compatibility afforded by the Nokia 6340 phone, other new features include a wallet that enables quick wireless transactions. Shipments are expected to begin during the first half of 2002.

“As TDMA carriers prepare for the future by building and integrating GSM technology into their systems, the Nokia 6340 wireless phone will give operators the flexibility to allow for roaming between their current and future networks,” said Pekka Vartiainen, senior vice president of sales for Nokia. “Additionally, since roaming is seamless and automatic, consumers will have the ability to use all of their digital services in both TDMA and GSM service areas without having to worry about what kind of technology is being used in a particular area.”

For mobile Internet connectivity, the Nokia 6340 phone employs a WAP 1.2.1 browser, operating on both GSM and TDMA networks. Enhanced features available on the WAP browser include direct calling for making calls directly to a number on the WAP site and cookies, which can be user enabled for easier browsing.

The network interoperability of the Nokia 6340 phone also extends to text messaging, as two-way text messaging across both TDMA and GSM networks is enabled using this new handset. Additional data support includes PC connectivity via either infrared or optional cable.

A number of unique personalization features, including timed profiles, an audio equalizer and advanced voice functionality are included in the Nokia 6340 phone. The audio equalizer can be used to fine-tune the sound of the phone, allowing for maximized voice clarity for each individual user. Along with voice dialing with support for up to 10 pre-programmed phone numbers, the Nokia 6340 phone accepts voice commands to control user-defined menu items via the spoken word, and up to 3 minutes of voice memo recording.

Additional features of the Nokia 6340 phone include:
· Predictive text input for fast and easy mobile messaging
· Included Extended 1000mAh Li-Ion battery provides:
Up to 5 hours GSM talk time and up to 4 hours TDMA talk time
Up to 16 days GSM and TDMA standby time
· Phone book with up to 500 contact capacity with up to 5 numbers and 3 text entries per contact
· Organizer includes calendar with up to 500 entries, daily/weekly view and to-do list with 30 tasks
· Capacity for up to 10 downloadable ring tones and up to 5 picture messages
· Nokia PC Suite (free download) for data synchronization and backup, custom ring tone and picture message design
· 4 games, including ‘Pass ‘n Rush’
· Full line of Nokia Original Accessories