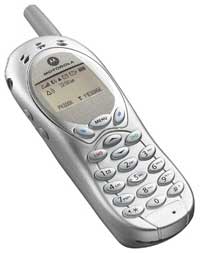 Motorola today introduced its first Code Division Multiple Access (CDMA) 1X mobile phone for the Americas, marking the company’s fourth 1X product offering globally. Leveraging the existing and successful design of the Motorola V120c that was released in mid-2001, Motorola has equipped its 120x mobile phone with the latest in high-tech features. The device is capable of supporting high-speed packet data and will provide consumers with the ability to stay organized with its advanced phonebook and scheduling features, or entertained with its messaging and gaming capabilities. Motorola’s new customizable and compact 120x will be available later this month and is expected to retail for less than $100.

In addition to the traditional voice features, the 120x is compatible with Motorola’s new MP3 Player accessory – a 2002 CES Innovation honoree – enabling users to take their favorite MP3 music files with them. When using the MP3 Player, an incoming call is recognized by a pause in the music, which can be accepted or sent to voicemail with the touch of a button. If the call is accepted, users simply speak into the microphone included on the cord of the MP3 Player headset. The MP3 Player is powered by the battery in the phone, with one hour of music listening utilizing the equivalent of only 20 minutes of talk time.

“The 120x is an exciting addition to our portfolio, providing a multi-functional tool for consumers who want reliable mobile phone functionality and a wireless music solution with the simple addition of the optional MP3 accessory,” said Ron Garriques, senior vice president, Personal Communications Sector, Motorola Inc. “By equipping subscribers with Motorola’s 120x mobile phone that includes the CDMA 1X technology, CDMA operators should be able to increase voice capacity on their networks.”

During 2001, Motorola introduced its first three CDMA 1X handsets in Korea. To date, the company has been awarded 11 commercial contracts to provide CDMA 1X network solutions in Japan, the United States, Brazil, Malaysia and the Ukraine.