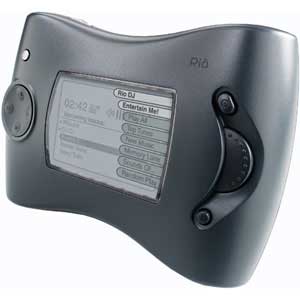 Expanding its digital audio leadership into new market categories, SONICblue™ today unveiled its first hard drive-based portable music player – the Rio Riot™. Designed to store an entire music collection, the Rio Riot is built around a 20GB hard-drive that holds more than 5,000 songs or 400 CDs worth of high-quality, digital music.

“To date, the most common feedback we’ve received regarding high capacity players is that the ability to store lots of music is great, but totally useless if you can’t find the music you want to hear, when you want to hear it,” said David Huffman, vice president of audio product marketing, SONICblue. “With the launch of the Rio Riot, we believe we’ve given users the best of both worlds, delivering thousands of songs in an intuitive and easy to use system.”

About the Rio Riot
Combining a sleek, highly portable design with a high capacity hard disk drive and an intuitive user interface, the Rio Riot meets the most demanding needs of today’s music lover. Key features of the Rio Riot include:
Powerful 20GB hard disk drive stores more than 5,000 songs or 400 CDs – placing your entire music collection at your fingertips.
Exclusive Rio LogiTrack interface makes it incredibly easy to find, sort and play your favorite songs. Components of the Rio LogiTrack interface include:
Ergonomic scroll wheel and dedicated, one-touch buttons and play controls keep your navigation consistent and interactive.
Visual-menu system makes it easy to sort through thousands of songs by track, artist, album, year, genre and favorites.
Exclusive Rio DJ™ playlist creator knows your music as well as you do and generates custom playlists of new music, songs by year or decade and favorites.
Integrated FM tuner with presets allows you to search out new music and stay current on what’s being played over the airwaves.
Rechargeable Lithium Ion battery delivers more than 10 hours worth of playback for long-lasting music on the go.
Category’s largest, backlit, high-resolution display (240 x160) brings the LogiTrack visual-menu system to life with a clear, crisp view of your music and control options.
Bundled MoodLogic personal music management software cleans up ID3 tag information, generates and shares one-click playlists based on music tastes, auto classifies music and recommends songs.
16 MB SDRAM Buffer stores your music in memory and stops the hard drive from spinning during playback – delivering up to 12 minutes of electronic skip protection, while also saving battery life and speeding up navigation.
Quality Accessory Package includes a set of comfortable, over-the-head Rio headphones and a custom carrying case that lets you view and access the unit while providing protection.
Bundled RealJukebox® and iTunes™ music management software ensures that your Rio Riot is PC or Mac compatible out of the box.
MP3 and WMA playback lets you listen to the most common file formats and is upgradeable to other emerging digital standards through software releases. SONICblue also plans to add support for the Audible spoken audio content service into the Rio Riot in a future release.
The first of many new Rio audio products for SONICblue in 2002, the Rio Riot will be showcased in SONICblue’s product display at this week’s Consumer Electronics Show (CES) in Las Vegas, Nevada. SONICblue’s CES display can be found at booth #2927 in the Central Hall of the Las Vegas Convention Center.

Pricing and Availability
The Rio Riot ($399.95 MSRP) is available for preorder on SONICblue’s eStore (www.sonicblue.com) and will be available toward the end of February in North American retail outlets. For more information on purchasing a Rio Riot, including detailed product specifications, please visit SONICblue’s website (www.SONICblue.com).