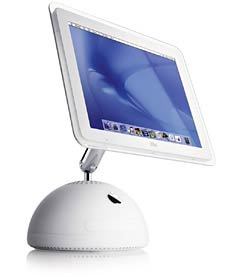 Apple® has unveiled the all-new iMac®, redesigned from the ground up around a stunning 15-inch LCD flat screen that floats in mid-air—allowing users to effortlessly adjust its height or angle with just a touch. The new iMac also features a powerful 700 MHz or 800 MHz PowerPC G4 processor and Apple’s revolutionary SuperDrive™ for playing and burning CDs and DVDs. The new iMac line includes three models, starting at $1,299(US).

“The new iMac ushers in the age of flat-screen computing for everyone. The CRT display is now officially dead,” said Steve Jobs, Apple’s CEO. “And with its powerful G4 processor and SuperDrive, everyone can now affordably create and burn their own custom DVDs and CDs.”

The new iMac’s stunning 15-inch LCD flat screen has a resolution of 1024 by 768 and offers approximately the same viewing area as a 17-inch CRT display. It’s also twice as bright and three times as sharp as old-fashioned CRT displays, and it’s much easier on the eyes, with zero flicker.

Inside the new iMac’s ultra-compact base lives the fastest iMac ever, with a Pentium-crushing 800 MHz* G4 processor with Velocity Engine™; a SuperDrive for playing and burning custom CDs and DVDs; up to one gigabyte of memory; up to a 60GB hard drive; and NVIDIA GeForce2 MX graphics with 32MB of DDR memory, which triples the 3D performance over previous models.

The new iMacs are designed to be the ultimate center of our emerging digital lifestyle and run Apple’s award-winning suite of software for digital photography, music and video. All new iMac models include iMovie™ 2, the world’s easiest to use video editing software; and iTunes™ 2, the amazing digital music software that lets users put an entire music collection on their Mac®, burn custom CDs and seamlessly sync to Apple’s new iPod™ portable digital music player. And, all new iMac models equipped with a SuperDrive include iDVD 2, so users can easily create and burn their own custom DVDs that play in consumer DVD players.

Every new iMac is also designed to run Apple’s new iPhoto software —the missing link in digital photography (available as a free download at www.apple.com). With iPhoto, users can easily import images directly from digital cameras; organize and manage a photo collection containing thousands of photos; view cross-dissolved slide shows of their photos on iMac’s stunning flat screen; automatically create a professional-looking web page of their photos; order professional-quality Kodak prints and enlargements; and even create and order a custom-printed, linen-bound book of their photos.

Additional features of the new iMac line include:

Build-to-order options for the new iMac include additional memory, Apple Pro Speakers, AirPort® Base Station and AirPort Card and the AppleCare Protection Plan.

*SuperDrive model only; in CPU and Photoshop tests.