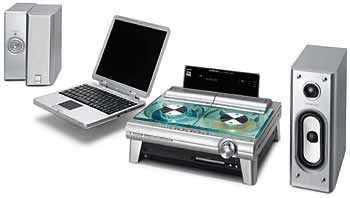 For audio enthusiasts who work with on a computer, nothing could be worse than a system that generates so much noise it competes with the work you are trying to do. To solve this problem, two companies have joined forces and recently announced a system comprising of a Crusoe-based notebook, dual CD player stereo and speaker system. The whole setup has been titled Avenue , and represents a PC designed for music.

The lightweight and thin notebook together with the speaker system is expected to begin selling some time in February 2002. The price is still up in the air, and as of yet there are no indications of a North American release for the Avenue (MPX-710).

The TM5800 800MHz Crusoe powered notebook employes a 12.1″ XGA TFT display at 1024×768 resolution and is small enough to fit in a B5 envelope. The notebook has a hairline finished aluminum body and features 128MB of memory, a 20GB hard drive, an 8MB RAGE Mobility M1 graphics chipset, a host of connectivity options (PCMCIA, (2x) USB2.0/IEEE1394, VGA out, S-Video, and audio jack) and weighs a mere 1.6kg.

Since the Avenue notebook uses no fan for cooling it allows users to enjoy the music fully. The system is loaded with Windows XP and is expected to have fairly long battery times, but no specific values have been mentioned.