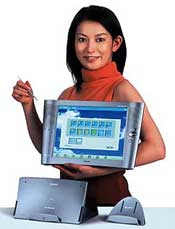 Sony Marketing (Japan) Inc. announced Dec. 12 it would sell a next version of Airboard IDT-LF1, the “IDT-LF2.”

The Airboard is a touch-panel type liquid crystal TV that is detachable from the tuner, and it can be connected to the Internet.

The tuner part of the Airboard called the base station is linked to the LCD screen by a wireless connection. The screen can be detached from the base station so that the user can move around the house with it and browse the Internet and watch TV from anywhere in the house.

The current model, the IDT-LF1, consists of the base station with a built-in modem. The IDT-LF2 features in addition to the Airboard’s detachable liquid crystal display, there is the function as a wireless LAN access point on the tuner and it enables up to 15 wireless LAN-capable PCs to be connected simultaneously to the Internet.

The wireless link between the base station and the LCD screen conforms to IEEE802.11b. The screen can show TV programs from up to 30 meters away when used indoors.

While the LCD for the current model is 10.4-in. the new version has a 12.1-in. screen, and is 2.5 times brighter. It is superior in image quality, Sony said.

The images on its TV and Internet screens can be captured and retained, or kept on the memory sticks as with the current model. Also, the new version has a “drawing function” which enables the user to alter the images kept on the display by using the attached touch pen.

Moreover, the base station is equipped with an USB terminal. Because a printer driver is installed, the TV images can be printed by connecting the printer to the USB link and pushing the print button on the monitor.

The Airboard’s liquid crystal display is of 800 x 600 dot resolution. It has a memory stick slot, a headphone terminal, a keyboard terminal (PS/2) and an USB terminal.

Sony said it is equipped with a lithium-ion battery that can power the screen for up to two hours when detached from the base station. The display measures 368mm in width, 242mm in height and 52mm in depth and weighs about 2.1kg when loaded with a standard battery.

The base station with a built-in tuner is equipped with a VHF/UHF terminal, two video input units, a video output unit, an S image output unit, and an USB and a 10BASE-T. The outer dimensions are 260mm wide, 170mm deep, and 130mm high, and it weighs about 1.2kg.