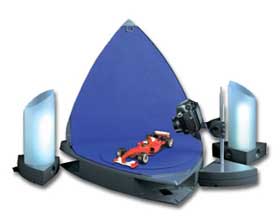 Olympus 3D ScanTop includes everything needed to create 3D content: easy-to-use 3D ScanWare software, lighting, and turntable. Creating 3D models take a few simple steps. The 3D ScanWare software controls all system components, the camera, turntable and lights. After a quick calibration step, the user simply places the object to be photographed on the turntable. With a touch of a button, the system captures a series of images of the object at different angles, using parameters such as resolution and number of images, set by the user. After the images are taken, the state-of-the-art software removes the background and creates a realistic and accurate 3D model. Once the 3D model is created, the color and texture of choice can be applied.

Other key features include registration of multiple scans, texture editing, integration of web features such as sounds, hyperlinks, animations, actions, etc. In addition, the flexibility to select the image resolution and other parameters allows you to customize each scan to suit your application.