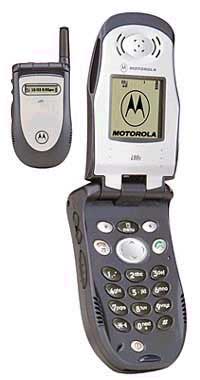 Users can choose from two new designs – the Motorola i90c model is a compact flip phone, while the Motorola i80s handset has a thin, sculpted style. Both handsets pack a rich set of features including the ability to upgrade them with applications to meet the users’ changing needs. These phones can become a mobile office, a game station, a calculator and more.

“The Motorola i90c and i80s phones were designed for those who demand both performance and style in their communication device,” said Peter Aloumanis, vice president of Motorola and director of U.S. market operations for the company’s iDEN Subscriber Group. “Users can schedule a meeting, access their corporate database, track their expenses, host a conference call on the speakerphone, and check flight status, all in a single handset – in either a flip-style or ultra-thin design.”

The Motorola i90c and i80s use Java technology to allow users to download and run applications, allowing the phone to perform multiple functions. These applications range from business programs such as corporate e-mail, database and directory access, to productivity tools, such as dictionary and unit converter, to entertainment and games. Users can download applications wirelessly from the Internet. With the introduction of the i90c and i80s models, Motorola has now delivered five Java technology-enabled phones, each with a different style to meet users’ personal preferences.

The Motorola i90c and i80s both offer a hands-free speakerphone for impromptu conference calls, voice-activated dialing, and a voice recorder. The two-way radio function allows users to communicate instantly with one or hundreds of individuals at the touch of a button. Other features include a phonebook capable of storing up to 250 entries, a datebook, and customized style settings, which enable the phone to adapt to different user environments, such as the office, car and home.

The Motorola i90c flip-style phone has a high-tech look and feel, with its midnight blue color and blue backlit dual displays and keypad. The phone features an exterior display, so users can view the Caller ID, date and time without opening the handset. The phone’s smart button lets users perform multiple tasks with a single key press without opening the phone. Ten selectable musical files and ten selectable ring tones allow users to personalize the ring style with rich polyphonic sound that can replicate 16 instruments. The Motorola i90c comes with several pre-installed applications including a calculator, note pad and the Sega game Borkov.

The handsets will be available through Nextel Communications and Southern LINC in the United States and TELUS Mobility in Canada.