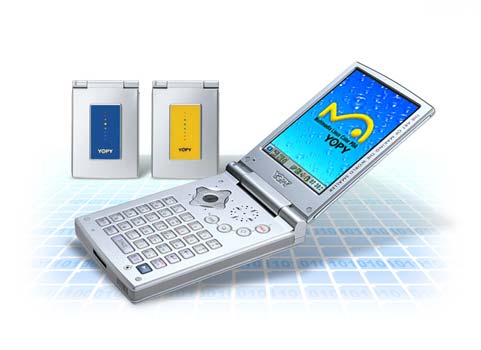 G.Mate’s Yopy, originally to be sold under the Samsung brand, has been around for a good while without making it to store shelves. The latest evidence is that its launch date has slipped yet again, but the device has at least made it into the form of a prototype, which G.Mate is showing off at Comdex Fall 2001.

The device was advertised for launch at the end of November, but G.Mate representatives at Comdex have told journalists that it won’t launch in Asia until January 2002. The U.S. and other markets won’t see the device until late 2002, G.Mate said.

Yopy has been reincarnated in an unusual form factor with a new set of specifications. Its clamshell design imitates a mobile phone, albeit a large one at 142g, about twice the weight of a typical mobile phone handset. It is aimed at the high end of the market, with a 206MHz StrongARM processor and a 3.5-inch 240×320 TFT LCD screen that displays 65,000 colors. It packs 64MB of RAM and 16MB of ROM, a Multimedia Card (MMC) expansion slot, microphone and headphone jack.

The upper part of the clamshell is taken up by the screen, while the lower part bears several navigation controls and, in an unusual move, a calculator-style keypad. Most PDAs with a keypad have opted for the QWERTY-style keyboard used in RIM’s BlackBerry.

G.Mate has mentioned a mobile phone attachment that clips onto the device’s back, but little information about Yopy’s wireless capabilities is to be had. It is, however, able to connect to a mobile via infrared.

U.S. pricing will be about $450, according to G.Mate representatives at Comdex.