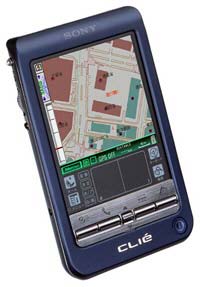 As time goes by, Sony’s goal seems to get clearer every day; to make sure it has enough models on the market to confuse every user from Japan to Alaska and back again sufficiently enough to make them buy at least two of them just to make sure. This time around, Japanese Sony websites have unveiled the Sony CLIE PEG-T600C series which has the same form factor as the recently announced Sony CLIE PEG-T415, but sports numerous improvements.

As could be expected, the PEG-T600C has a Memory Stick slot and an enhanced IR port, as well as an USB cradle for connectivity options. In addition to the hardware, there’s also quite a bit of bundled software that comes with the device, including a CLIE Mail client, a web browser called Xiino, Documents To Go 4.0 Standard Edition, a World Alarm Clock and the same CLIE Remote Commander tool that allows the PEG-T600C to function as a universal remote control like the PEG-T415 – and there’s more software too.