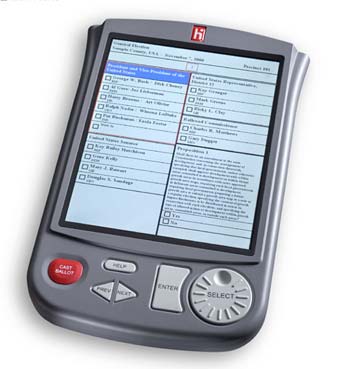 Voters in Canton and Rome, will be some of the first in the State of Georgia to use the Hart InterCivic eSlate™ electronic voting system as part of a pilot project being conducted on Election Day by the office of Secretary of State Cathy Cox, Hart InterCivic announced today.

“We are very pleased to have the opportunity to work with the voters of Rome and Canton as part of this pilot project,” said David Ashworth, general manager for the Southeastern Division of Hart InterCivic. “It is a privilege to work with election officials from the office of Georgia Secretary of State Cathy Cox, who is an innovator and leader in the field and is respected by election professionals throughout the country.”

Evaluating equipment and measuring its strengths and weaknesses is the goal of the pilot project. Six manufacturers, with equipment that has passed both national and Georgia certification standards, are participating in the program. And citizens will be interviewed after they cast their votes to gather their reactions and opinions of the new voting technology.

The eSlate system and its components simplify and streamline the complicated balloting, tabulation and reporting process. It offers several features that set it apart from other electronic voting systems, including the Rotary Select™ wheel interface that allows easy voter navigation through the electronic ballot and reduces problems typical of older touch-screen voting systems. eSlate also features a durable full-color display and the ability to present the ballot in a variety of ways, including different languages.

eSlate is also uniquely easy for election officials to set-up and manage, with no component weighing more than 10 pounds. With its battery backup power, eSlate can easily be disconnected from the precinct network and carried to voters for curbside voting if necessary.

All eSlate components can be configured to provide access for visually impaired, mobility-impaired, or literacy-challenged voters. Accessibility features include an integrated audio ballot reader, an interface for breath control (“sip-and-puff”) devices and a specially designed polling booth.

The system records each vote accurately, tabulating vote totals and reporting and archiving results securely and reliably. The eSlate system operates in a secure network, with no external network access that would allow intrusion. Integrated security features prevent tampering with ballots or
results and all data is stored in three separate locations for back-up and reliability.

The eSlate system has been used to conduct several live elections in Texas, Colorado and Maryland. The system was recently purchased by Tarrant County (Fort Worth) and Harris County (Houston), Texas for initial use in the November ’01 elections. Harris County is the nation’s third largest county with 3.1 million citizens and 1.4 million registered voters. The Harris County eSlate installation is the largest electronic voting system implementation in history.