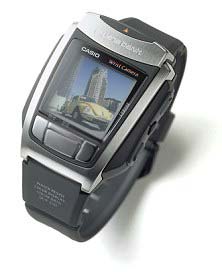 Casio’s digital camera watch is entering its 3. generation: while the WQV-1 could only shoot and display greyscale images, its successor model, the WQV-3 was already capable of shooting colour images, though it could still only display them in greyscale. The latest in the series, the Casio WQV-10, likes to have everything in colour: not only are images shot in colour – they are even displayed in colour on the wrist.

The most striking new feature of the WQV-10 is its colour LCD screen. The 78 x 80 pixels STN screen is capable of displaying 4,096 colours at once. Internally, the images are still recorded with 16.7 million colours, but the full range of colours only manifests itself on a computer screen. Despite the colour display, Casio claims that the WQC-10 doesn’t use up much more energy than the WQV-3 did with its monochrome display, thanks to more efficient energy circuits. Apart from this, the WQV-10 and the WQV-3 have almost identical technical specifications: a 1/14″ CMOS sensor with a 1.1 mm lens (light sensitivity: F2.8) produces image files with a resolution of 176 x 144 pixels. These are stored on its internal 1 Mbyte flash memory, which can hold up to 100 of these miniature JPEG images. The only requirements for proper exposure and focus are a sufficiently bright motif (50 to 90,000 Lux) and a minimum distance of 30 cm from the watch. Centre weighted average metering and Auto Luminance Control (ALC) ensure correct exposure. Users can choose between three shooting modes: indoor shot, outdoor shot or dusk. The shutter speed range lies between 1/660 and 1/5.5 second. Exposure correction and a self-timer (either 2 or 10 seconds) are also available. The images are transferred to a home PC using an infrared adapter.

Of course the WQV-10 also fulfils its main function – that of a watch. Not only does the WQV10 display the time, it can also count backwards, act as a stopwatch, store five different alarms, and even display a whole calendar month at a time. The watch also comes with a database function, allowing users to add short alphanumeric comments (up to 24 symbols per image) to each image, in addition to the date- and time stamp already present. The WQV-10 draws its power from a standard CR2032 button battery. When used exclusively as a watch, its battery lifespan given at 6 months. A power-save function automatically switches the watch off as soon as it is removed from the wrist. The WQV-10 version of Casio’s digital camera wristwatches is slightly larger than the WQV-3, measuring 51.1 x 39.3 x 18.2 mm (W x H x D). Like its predecessor, it is water resistant (not to be confused with water tight). The WQV-10 will be available in February 2002 at a price of between 300 and 350 EUR, depending on whether it comes with an infrared adapter or not.