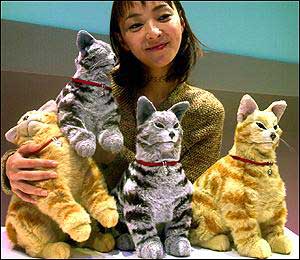 Omron Corporation will begin selling as a new product a cat type communication robot from November 20. Orders can be placed at Takashimaya (limited to 7 stores) starting October 17, and orders will be accepted by phone or over the Internet from November 3. Available in two colors, gray and brown, sales at this time will be restricted to 5,000 units.

Envisioning a society embodying a wide diversity of values, where everyone can live comfortably at peace (what Omron calls the Optimization Society), Omron sees the importance in the realization of a machine that can communicate with humans and understand them. A machine that is gentle to humans and responds appropriately to an individualÍs needs. Natural communication between humans and machines is made possible with the cat type communication robot NeCoRo.

Created with Omron’s core sensing and control technology and artificial intelligence technology, NeCoRo realizes natural human to robot communication. Because of its ability to react to human movement and express its own emotions, people pour their affection into this robot and feel attached to it as they would a pet. By living with each other day after day, the person becomes at ease with the robot as it enriches the person’s life.

NeCoRo, a robot with synthetic fur giving it a feline appearance, introduces communication in the form of playful, natural exchanges as between a person and a cat. Via internal sensors of touch, sound, sight, and orientation, human action/thoughts can be perceived, and feelings/wants are generated based on internal feelings. Using 15 actuators inside the body, it behaves in response to its feelings. It will get angry if someone is violent to it, and express satisfaction when stroked, cradled, and treated with lots of love. Based on its own physiological rhythms, it will express its desire to sleep or cuddle. Moreover, through a learning/growth function, while living with each other day after day, the cat will become attached to its owner and its personality will adjust to the owner. And as it begins to remember the sound of the owner’s voice and its own name, it will recognize its name when called out by the owner.

Characteristics
1) Responds to human movement/emotions
2) Has feelings and desires, and its personality will adjust to its owner
3) Remembers its name and acknowledges its name when called
4) Synthetic fur gives it a feline appearance, so it feels natural to treat it like a cat, stroking and hugging it