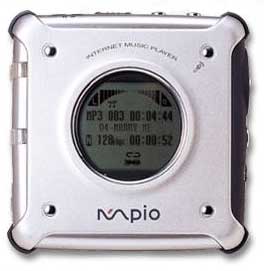 Digital Global Network today launched the first portable MP3 player, voice recorder, and digital camera device to the US market. The MPIO-DMG was introduced to the Asian market in April 2001 and quickly became the number one selling MP3 Player in Japan. In addition to its enormous success in Japan, Digital Global Network was presented with the “Millennium Award” from the Korean Government for its MPIO-DMG player.

The MPIO-DMG is a mere 2×2 inches but boasts such features as 20 hours of playtime with a single AA battery, over 17 hours of voice recording (4min./1MB) and up to 256MB of internal and external memory capacity. The MPIO-DMG has a backlit LCD for displaying track information in several languages and supports industry-accepted standard, MP3, as well as Microsoft’s popular WMA audio format. The digital camera add-on, which will be available in November, can be used as a digital still camera or web camera for real time video.

“The MPIO brand is well recognized in the Asian market and we OEM to most of the major electronics to the States,” said Joseph Lee, President of Digital Global Network. “The ability for a user to access MP3 playback, voice recording, and digital imaging in one compact solution instead of three separate products is extremely convenient, as well as cost effective for the user.”

Digital Global Network’s MPIO-DMG includes a full list of features, making it the best all-in-one solution available on the market. The MPIO-DMG includes a USB cable, high quality digital earphones, a carrying case, hand strap, as well as 1 AA battery, which can provide the user with over 20 hours of playtime. The MPIO-DMG is now available for 32MB, 64MB and 128MB at $149.00 – $219.00 (MSRP). The add-on digital camera will be available for purchase in the United States in November 2001.