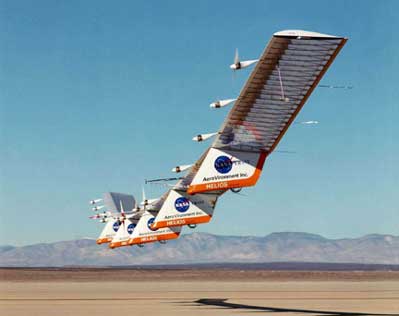 A new technology platform has emerged which provides a low cost, rapidly deployable, local access solution for broadband telecommunications and other applications by overcoming the last-mile barriers facing conventional approaches. Through funding support from NASA, AeroVironment has developed an unmanned, solar-electric airplane called Helios which will be capable of continuous flight for up to six months or more at 60,000 feet in the stratosphere, above the weather and commercial air traffic.

Helios will provide a telecommunications platform from this position in the stratosphere, acting as an 11-mile tall tower—hence the name “SkyTower”. SkyTower local access networks have many advantages which make them excellent complements to, or local alternatives for, terrestrial and satellite systems.