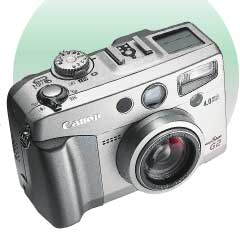 Canon U.S.A., Inc., a subsidiary of Canon, Inc. (NYSE: CAJ), continues to strengthen its position in the highly competitive consumer digital camera market with the introduction of its most advanced product to date: the new Canon PowerShot G2, the company’s first 4-megapixel model. The Canon PowerShot G2 Kit will be available through authorized Canon dealers in September at a suggested list price of $999.

The Canon PowerShot G2 joins a family of Canon PowerShot-series cameras including the high-end Pro90 IS, the mid-range S300 and S110 Digital ELPHs, and the entry-level PowerShot A20 and A10. Collectively, the Canon PowerShot digital camera line-up offers consumers the widest range of features in the industry. From 1.3-megapixel to 4-megapixel models, Canon provides digital imaging solutions to fit nearly every need and price point.

“The new Canon PowerShot G2 is a great example of our commitment to achieving the highest standards in imaging products while providing our customers with features and functions they need and expect from Canon,” said Yukiaki Hashimoto, vice president and general manager, Photographic Products Group, Canon U.S.A., Inc. “The Canon G2 gives users greater creative control and allows them the opportunity to truly express themselves with photography.”

The design of the Canon PowerShot G2 is based on the popular PowerShot G1, with an elegant champagne metallic coverplate and an enlarged handgrip for better ergonomics.
The Canon G2 has many features in common with its predecessor, including a superbly sharp high-speed 7-21mm f/2.0-2.5 zoom lens (equivalent to 34-102mm in the 35mm format), a Vari-Angle LCD viewfinder, a conventional camera body design, a high-speed plug-and-play USB interface, compatibility with Canon EX-series Speedlite flash units, and compatibility with Type I and II CompactFlash memory cards, including IBM’s series of Microdrives.

Like the Canon PowerShot S300/S110 and A10/20, the Canon PowerShot G2 uses RGB primary color filters on the CCD chip for maximum color reproduction accuracy. This feature, together with proprietary noise reduction and digital signal processing, works behind the scenes to deliver top-notch image quality that’s unique to Canon.

For maximum flexibility, the Canon PowerShot G2 provides users with a selection of 13 image quality settings including 3 JPEG compression modes (Superfine, Fine and Normal) at any resolution. It also features Canon’s exclusive RAW mode for maximum control over image attributes such as white balance, contrast, sharpness, saturation and bit depth without image-degrading artifacts. By combining the G2’s RAW file capabilities with its optional ISO 50 sensitivity setting, users can achieve higher image quality than any competitive model on the market today.

Faster Signal Processing and Lower Power Consumption
Because of improvements in the camera’s image processing circuitry, the Canon PowerShot G2 completes most camera operations at least twice as fast as the G1. The faster processing speed makes the G2 feel quicker and more intuitive. At the same time, power consumption has been cut nearly in half, allowing the G2 to run as long as 5 hours in playback mode on a single battery charge.

Three-Point Autofocus and Manual Focus Settings
The Canon PowerShot G2 incorporates a three-point autofocus system to ensure perfectly focused images even when shooting off-center subjects. In Creative Zone exposure modes, the user can manually select any of the three focusing points by pushing a button on the back of the camera and using a selector switch. The active focusing point is indicated by a white box on the LCD monitor. When the shutter button is pressed halfway, the box turns green or yellow to indicate autofocus completion status.

The Canon G2’s manual focus function has been made easier to use by displaying a numerically indexed distance scale on the LCD monitor. Additionally, the portion of the image covered by the active focusing point is digitally enlarged during manual focusing to ensure maximum focusing precision. This feature works with all 3 focusing points, and combines the advantages of an enlarged view without losing the overall composition of the scene.

New Exposure Modes
The Canon PowerShot G2 provides a wide range of 13 exposure modes divided into 2 basic categories: the Image Zone and the Creative Zone. Exposure modes are selected on the top of the camera using a rotary dial.

Image Zone modes are fully automatic, and intended to optimize camera settings according to the scene. Selections include Full Auto, Pan Focus, Portrait, Landscape, Night Scene, Color Effect, Stitch Assist, and Movie. The Color Effect mode is new, and allows users to choose between Vivid, Neutral, Sepia or Black and White. The Movie mode has been improved to provide not just one but two resolution modes with sound: QVGA (320×240), and Q2VGA (160×120). The maximum recording duration is 30 seconds in QVGA and two full minutes with Q2VGA.

Creative Zone modes offer more control. They include Program AE, Shutter-priority, Aperture-priority and Manual. Program AE has been improved with the addition of Program Shift, which allows the user to bias the exposure towards higher shutter speeds or smaller apertures than the standard setting. Manual mode has also been improved with the addition of a numerical metering display. Like the G1, the G2’s Creative Zone offers user-selectable settings for exposure compensation, flash exposure compensation, auto exposure bracketing, white balance, and other parameters. A new “Fluorescent H” white balance setting allows better color matching for daylight-type fluorescent light sources.

More Metering Modes
The Canon PowerShot G2 offers users three different types of Metering: Center-Weighted Average, Spot, and Evaluative. With center-weighted average metering, the camera measures light over the entire image and places proper exposure emphasis on the center of the frame. Spot metering measures a specific portion of the frame, and can be locked to the center or linked to the active focusing point. Evaluative Metering, however, takes the entire scene and divides it into several sections. For each section, the camera evaluates a number of complex lighting factors based on each individual section such as the position of the subject, the brightness, the background, and backlighting. The result is a properly exposed image throughout the entire scene.

Histogram Display
The Canon PowerShot G2 is capable of displaying a histogram of the photo image on the LCD monitor in a manner similar to the EOS D30 professional model. The histogram is a graph with the horizontal axis representing “brightness” and the vertical axis depicting the cumulative number of pixels that have that brightness. The histogram allows users to check the overall exposure of each photo. Additionally, if any portion of the photo is grossly overexposed, warning signals are displayed.

Direct Printing with Card Photo Printer CP-10
The Canon PowerShot G2 offers a Direct Print mode that enables users to print hard-copy images with or without cropping using the Canon CP-10 dye sublimation printer. The Canon CP-10 makes printing from digital files simple and fun by allowing users to control all print settings directly from the camera’s LCD monitor. Printer data is then transferred to the Canon CP-10 directly through a dedicated interface cable. The new, ultra-compact printer produces beautiful, 300 x 300 dpi credit card-sized color prints in as little as 56 seconds. The Canon CP-10 can also be used to print eight miniature copies of the same image on one sticker sheet, adding a new dimension of fun for everyone. Each sticker measures approximately 0.9 x 0.7-inches.

Image Management Software
The Canon PowerShot G2 comes with Adobe PhotoShop 5.0 LE and Apple QuickTime 5.0, ZoomBrowser EX 2.8 (for PC) and ImageBrowser 1.8 (for Mac); PhotoRecord 1.2.4 (Windows only); PhotoStitch 3.1.3 (Windows) and PhotoStitch 3.1.2 (Mac) and RAW Image Converter 1.1. RemoteCapture 2.0 enables a USB-connected Canon G2 camera to be controlled by a compatible personal computer. Many camera settings such as focal length, resolution, compression, flash mode, etc., can be adjusted from compatible personal computers and the images can be recorded directly to the PC. In addition to all of these software applications, the G2 is supplied with plug-in modules and TWAIN drivers as well as a WIA driver for Windows Me and a USB Mounter for Mac OS 9.0 and 91. The WIA driver and USB mounter allow a compatible PC to mount the camera as a hard drive on the desktop and display thumbnails to facilitate simplified image data transfers.

System Accessories
The Canon PowerShot G2 provides even greater creative flexibility with optional lens converters and adapters. The WC-DC58 Wide Angle Converter shortens the focal length of the camera’s lens by approximately 0.8x, resulting in an effective focal length of 27mm. The TC-DC58 Tele Converter extends the camera’s longest focal length from 102mm to 153mm. The Close-Up Lens 250D enables the G2 to fill the frame with subjects as small as 1.2 x 1.5 inches. The Conversion Lens Adapter LA-DC58 allows the Tele Converter, Wide Angle Converter and Close-up Lens to be mounted onto the G2 body. As a standalone, the conversion adapter accepts any 58mm filter. Last but not least, the Canon PowerShot G2 is compatible with all Canon EX-series Speedlite flash units including the 220EX, 420EX, 550EX and Macro Ring Lite MR-14EX. The use of optional Speedlites provides tremendous creative control over lighting quality.