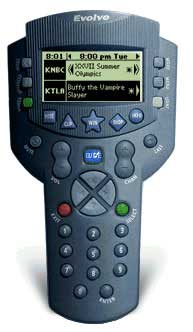 Guide Remote, the world’s most advanced Internet-based interactive universal remote control, was launched here today by Evolve Communications, Inc. The new Guide Remote interactive television remote control is the first device of its kind to use the Internet as its content platform.

Information is sent to and from the Guide Remote during weekly web sessions at the GuideRemote.com web site, using patented Second Screen communications technology on a new information and entertainment network that is owned and operated by Evolve.

Guide Remote is available now for purchase over the Internet at www.GuideRemote.com and it will soon be available in consumer electronics stores across the US. The manufacturer’s suggested retail price is $199.99. There is no subscription fee to users for the television program guide or other information in the Guide Remote™.

The Guide Remote™ is aimed at television viewers who love TV and enjoy both technology and the Internet.

“This changes everything about how you watch television,” said Frank A. O’Donnell, Evolve’s CEO and a co-founder of the company. “You can enjoy TV without interruption and still surf around to find what else is on. There are all kinds of fun and entertaining offers on the Guide Remote™. If you’re interested in one of them, you can just press a button and the remote remembers it for you. Later, when you’re on the Web, you can look at all the things you liked.”

In development for four years, the Guide Remote™ works with all television, cable box and satellite TV brands. It is the most advanced interactive remote control on the market today. It offers users a number of content options, including the ability to buy products, get detailed information on shows, enter contests and sweepstakes, participate in opinion polls, receive program recommendations from critics and, eventually, receive coupons directly related to particular television shows.

“The Guide Remote™ opens up a whole new way of extending the television viewing experience,” said O’Donnell, who was part of the team that created the original preprogrammed universal remote control in the mid-1980s.

“It makes television watching much more enjoyable for the family and allows viewers to save time when looking for their favorite shows,” he said. “Our research shows that once consumers have used the Guide Remote™ for a few weeks, they find it becomes a necessary part of their television viewing experience. It’s addictive.”

Evolve holds a portfolio of key patents covering the Guide Remote’s interactive technology. According to Paul Darbee, Evolve’s chief technology officer and a co-founder, “The concept of having a second, smaller screen on remote controls is here to stay. The remote in your hand will become more interactive, with enriching content, better instant TV viewing guides and new entertainment value for all television viewers.”

Evolve is currently working on a whole line of sophisticated products that offer greater viewer benefits, easier use and more advanced display technology, even for those without an Internet connection.

The company, according to O’Donnell, is positioned to capitalize on the fast-growing market for “smart” television products. Last year, there were five million households with “smart devices” tied to television sets. In 2005, that figure is expected to rise to 65 million, according to Forrester Research.