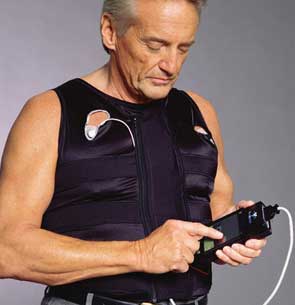 You’ve seen those joggers running in place at traffic lights as they check their pulse and stare at their wrist watch? That scene may fade into history if the U.S. Food and Drug Administration (FDA) approves new technologies that combine medical science with the latest innovations in Internet and data processing technologies.

At least two startups are developing forms of clothing incorporating monitoring devices that can transmit vital signs to remote locations. VivoMetrics Inc. has a lightweight vest called the “LifeShirt” that features embedded sensors that can track cardiac and respiratory signals, as well as more than 30 other physiological signs.

And a company called Sensatex Inc. has its “SmartShirt,” based on similar technology but with a more serious origin.

“We’re in the midst of finalizing the prototype and getting everything squared away,” Sensatex spokesperson Mary Kent told NewsFactor Network.