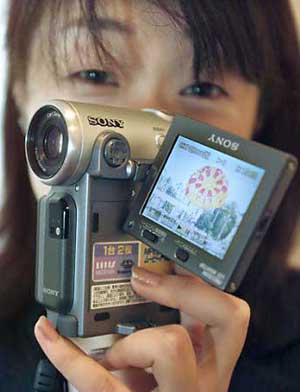 For those who equate video camcorders to a pitched battle with cables, Japan’s Sony Corp (news – web sites) may have a solution.

The giant consumer electronics maker, also the top maker of digital videos and still cameras, unveiled on Monday two ”networked” video cameras which feature short-range wireless technology known as Bluetooth, which allows devices to communicate with each other without cable connections.

Bluetooth will allow the two video camcorders, the DV format DCR-PC120 and the new MICROMV format DCR-IP7, to send moving and still digital images directly to personal computers, or via a mobile phone to the Internet.

“This is the world’s lightest and smallest digital video camera, and now it is networked,” said Keiji Kimura, in charge of Sony’s internal company for mobile products.

The silver gray and black DCR-IP7 he held up was about the size of his hand. Sony is calling it the “Network Handycam IP.”

“Up until now, the PC was the primary way of connecting to the Internet. While that may still be the case… an increasing number of mobile devices are connecting directly,” Kimura said.

The Network Handycam IP uses new MICROMV technology that converts moving images and sound to the MPEG2 format, which allows devices to store and transfer videos efficiently because it takes up less memory space.

Sony says it has about 44 percent of the digital video market while Matsushita says that it holds about 30 percent.