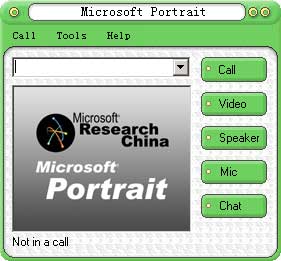 ” Once in a while, a cool handheld computing innovation emerges. That’s the case today as I introduce Microsoft Portrait, a program in development at Microsoft Research, the computer science research arm of the Redmond, Wash., software giant.

Videoconferencing traditionally has required a lot of computer power and relatively speedy network performance, so you might be asking how this is possible. Jiang Liu, the young Microsoft researcher behind the technology, has delivered Portrait by keeping things extremely simple.

For example, Portrait doesn’t send video in color. Rather, it’s delivered in black and white. This is essential to ensure that images can be transferred at speeds as slow as 9.6 kilobits per second, the same speed used by VoiceStream Wireless’ GSM (Global System for Mobile Communications) network or the Mobitex network that powers Research in Motion’s pager-style Internet communicators. ”