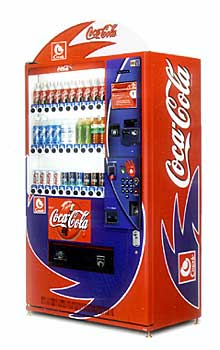 The new service, named “Cmode”, links a specially developed Coca-Cola vending machine equipped with a printer, sensor and speaker, and connected to i-mode, the Internet-enabling system launched by NTT DoCoMo. Cmode members can accumulate user points that can be exchanged for soft drinks or for one of a variety of Cmode services that are available through i-mode.

To help gauge consumer response and to identify additional service options that might be introduced later, the three companies will conduct several months of trials beginning September 3. During the 17-week trial period that ends December 31, a total of 25 Cmode-friendly vending machines will be installed at strategic locations around Tokyo.

Cmode is a compound word combining the initial “C”, which stands for Coca-Cola, culture and communication, and ‘i-mode’. The decision to introduce the Cmode service follows the agreement reached in March by Coca-Cola, NTT DoCoMo, and Itochu to explore the possibilities presented by marrying DoCoMo’s cell phone enabled Internet service with Coca-Cola vending machines. Itochu is providing marketing and financial support relating to technology and service content.

The vending machines to be linked to the new service are called “Cmode information terminal vending machines” or Cmo. In addition to being conventional vending machines, Cmo units have an embedded computer that exponentially increases their functionality and allows consumers to reap the rewards of a unique membership-based service.

Initially, trial testing of the machines will be possible at “The World of Coca-Cola TOKYO”, “Shibuya 109” and the “Shibuya Miyamasuzaka DoCoMo Shop”. Later, more Cmo vending machines will be available throughout Metropolitan Tokyo, particularly around Shibuya where Japan’s cell-phone toting, i-mode savvy youth gather in large numbers.