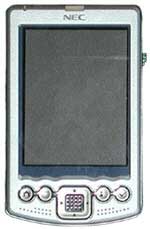 “Things seem to be going Microsoft’s way these days, as the company can enjoy the fact that its operating system is finding its way to new computing giants such as Toshiba and NEC, while HP and Compaq are planning new devices. As you might know, Toshiba’s new Genio e550 comes close to be designated as a work of art – but NEC’s PDA does in fact look even better, at least in our opinion.

Like the Toshiba, the new NEC Pocket PC will be launched in Japan this fall, whilst an International version will be available in the first half of 2002 – which means there is a good chance that at least one of these versions will contain Microsoft’s next-generation Pocket PC operating system, codename Merlin. Unfortunately, NEC would not comment on this at this point in time, which leaves the question open until further notice.

The processor will be an Intel StrongARM 206 MHz, but the amount of built-in ROM and ROM is as of yet not available to the public. Neither is information regarding the display available, but we do know that it will have a dual CompactFlash and SD Card slot built-in, which makes the specifications we know quite similar to Toshiba’s new Genio e550 series Pocket PCs.”