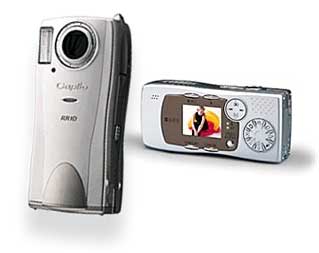 Ricoh Japan has announced a new combination digital camera / MP3 player, according to Yamada Kumio’s digitalcamera.gr.jp website. The Ricoh Caplio RR10 is a 2 megapixel, 2x optical zoom unit which has still image, video, webcam and MP3 capabilities. According to Ricoh, the design was based on the shape of a mobile phone; the unit is noticeably longer and slimmer than most digital camera designs. The RR10 can capture 1600×1200 pixel still images in either uncompressed TIFF, Exif 2.1 JPEG or monochrome TIFF formats, as well as 320×240 pixel AVI MotionJPEG video clips. Sound is recorded along with the video clips, and the microphone can also be used to record audio clips to annotate captured images. The camera comes with a docking station called the ‘Ricoh Base’, in which it is charged, and which also doubles as the camera’s computer connectivity via a USB connection. When in the docking station, the RR10 can also be used as a webcam for videoconferencing.

Unusually, the docking station also contains the camera’s video-out connectivity – allowing images to be previewed on a TV by connecting the base station to the TV, and then putting the camera in the base. A one-touch button on the base allows images to be transferred to a PC easily, in much the same manner as you’d synchronise a PDA. Bundled audio headsets (which don’t have a remote control or volume control built-in) can be used to listen to MP3 audio files on the device; an optional remote control unit is available but it is a different model to that bundled with Ricoh’s other digicams, and we are not certain if it is infra-red or wired, and what it can control.