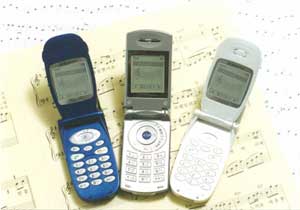 Following competition among handset makers over developing the smallest and lightest models, ringer melody quality is increasingly becoming a major selling point. In response, Samsung Electronics has completed development of new melody phones which use 16 chord progression. Among the 50 basic options are top 40 music and sounds of nature as well as features which enable the user to download current hits for use with the ¡°Palm Top Karaoke¡± function.

Unlike existing phones, the ring is not mechanically produced. Instead, a natural sound consisting of a 16-chord progression is offered, producing a variety of beautiful tunes.

The newly launched melody phone features a ¡°Palm-top Karaoke¡± function with background animation accompanying the melody that sounds very much like the original music. Ring sampling is possible so that the voice of one¡¯s child, sweetheart etc. can be heard when a call is incoming.

The phones can transfer wireless data at up to 144Kbps, and offer clear, clean sounds when network games are played on the unit. A large 4-line LCD, an additional LCD screen which is on the outside of handset, can be used to receive short text messages, check phone status, or identify the caller. Also, up to 2,400 phone numbers can be stored in the high-capacity memory.

The new melody phone(SCH-X350) with expandable function is the first in the industry which enables the user to download a variety of JAVA applications and games.

With the prospect of the cdma2000 1x accounting for 80% of the domestic cellular phone market within the latter half of this year, Samsung Electronics plans to focus on product diversity and strengthen marketing strategy. The new phone is expected to gain popularity among younger generations.
Samsung Electronics¡¯ new 16 chord progression melody phone will be available next week in three models: SPH-X2500, SCH-X130, SCH-X350 with the price in the 500,000 Korean Won range.