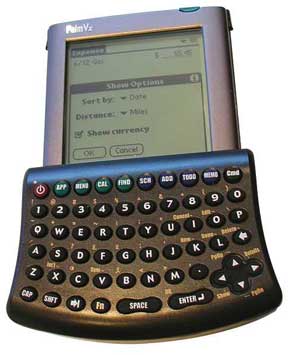 The TB5000 is the first model in SIAS’s new Thumboard(tm) Keyboard line and marks the beginning of the company’s diversification into the PDA/handheld arena. The Thumboard(tm) offers people on-the-go who want quick, portable typing a simple, easy way to enter information into a PDA.

“We’ve learned through consumer market research how awkward and time-consuming the graffiti application is to use on handheld devices,” comments Stokely Marco, director of marketing, Seiko Instruments Austin. “So we’ve eliminated the difficulty of entering data, as well as designing the Thumboard(tm) to fully integrate with the handheld for a `leave-on’ approach, thus providing improved functionality and easier access to key Palm OS® features.”

The TB5000, which slips directly onto one’s handheld fully covering the graffiti area and interfacing with the serial port, goes beyond general keyboard functionality with the inclusion of Palm(tm) OS Hot keys (Calendar, To Do, etc.) and text editing capabilities by way of the Command function key.

With its QWERTY keyboard, direct numeric keys and an extensive character set, it is ideal for typing notes and messages, as well as updating calendar and contact information. Its small size and ease of integration enables the user to keep the Thumboard(tm) on the device at all times, barely increasing the size of the PDA.

SIAS has further simplified the Thumboard(tm) feature set with the inclusion of the primary soft keys, such as “New,” “Done,” “Delete,” taking away the extra step of needing to touch the screen to execute these commands.