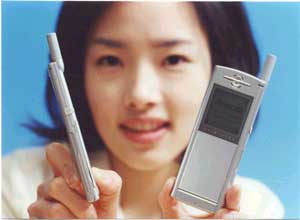 Samsung Electronics unveils an ultra-slim handset less than 1cm thick (Model name in Korean domestic market : SPH-N2000), which expects to begin a full-fledged competition of making slimmer handsets following by the heated competition of lighter and smaller handsets in the industry.

The newest slim-phone is only 9.8mm thick even including a standard battery, and is the slimmest handset introduced in the industry. It has broken the 10mm barrier which was considered the technological limit in making slim handsets.

Sony and other Japanese companies have developed handset models about 10mm thick in bar type. However, Samsung Electronics is the first company to develop and introduce a 9.8mm thick handset in flip type even with a standard battery.

The latest slim-phone incorporates a 4-Gray LCD and can display four gray scale tones. It can also display eight lines and provide a powerful wireless internet function by incorporating the latest internet browser ME (Micro Explorer).

Other features of the handset includes an upgraded SMS(short message Service), wider animation character selection, sample imoticon, and a memory capacity that can store up to 1,000 phone numbers.

Samsung Electronics exhibited the product last month at the EXPO COMM KOREA 2001. Consumers showed a big interest in the handset claiming that they could not feel whether they were actually carrying the handset. The handset is expected to be popular among consumers owing to its high portability.

Following the competition to make smaller and lighter handsets, it is expected that the competition to produce slimmer handsets will begin. Samsung Electronics will lead the industry with the introduction of the slim-phone, and continue with its efforts to develop innovative products that can meet consumer demands.