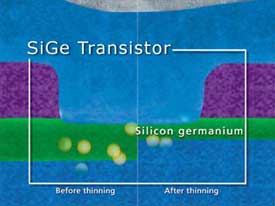 The transistor uses a modified design and IBM’s proven silicon germanium (SiGe) technology to reach speeds of 210 GigaHertz (GHz) while drawing just a milliamp of electrical current. This represents an 80 percent performance improvement and a 50 percent reduction in power consumption over current designs.

“Just as aircraft were once believed incapable of breaking an imaginary ‘sound barrier’, silicon-based transistors were once thought incapable of breaking a 200GHz speed barrier,” said Bernard Meyerson, IBM Fellow and vice president, IBM Communications Research and Development Center. “Makers of high performance electronics like networking gear are no longer forced to use chips made of exotic and expensive materials to reach these speeds. Silicon’s future is safe as the preferred medium for chip-making.”

Transistor speeds are largely determined by how quickly electricity passes through them. This is dependent on the material the transistor is made of and the distance electricity must travel through it. Standard transistors are made of ordinary silicon. In 1989, IBM introduced an improvement to the basic silicon material by adding germanium to greatly speed the electrical flow, improving performance and reducing power consumption. With this latest achievement, IBM is combining the use of the SiGe material with an improved transistor design that shortens the electrical path to speed up the device.