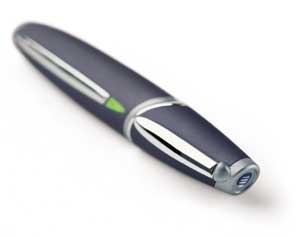 The Chatpen technology offers tremendous potential for operators and their customers by creating a broad range of new SMS, fax, e-mail and data services.

The product is scheduled for launch in the first quarter of 2002, though a limited pre-launch in association with Europolitan-Vodafone will take place in Sweden during the fourth quarter of 2001.

Using a paper catalogue, consumers will be able to order products electronically without ever touching a computer. Using pre-printed forms, companies will collect data, take inventory and manage other types business communications – even the remote signing of contracts. Everything from the instant purchase of airline tickets to the delivery of flowers or pizza from a newspaper advertisement will be possible with Chatpen. As Chatpen and paper products featuring the dot pattern it uses become more widespread, numerous new applications will appear.

Though it looks and writes like a normal pen, Chatpen also “reads” its location with the help of an almost invisible dot pattern printed on ordinary paper. This information is sent via Bluetooth and a GPRS mobile phone, letting consumers write on paper and digitally at the same time. Consumers will also find that they are no longer restricted to text- based SMS or e-mail, but can send handwritten notes with Chatpen to anyone with a mobile phone, PC or PDA. Anything that can be drawn or written can be sent instantly, making messaging more personal and simplifying the process of sending text in languages that do not use the Roman alphabet.

Though simple in appearance and function, Chatpen contains state-of-the- art technology that includes an infrared camera, an image processor and a Bluetooth wireless transceiver. When writing with Chatpen on paper that features a subtle pattern of dots developed and owned by Anoto AB, these hidden components “read” the pen’s location. This information is sent via Bluetooth wireless technology to a mobile phone, which then passes it via GPRS to another mobile phone, a PC or a PDA. Anoto AB is a subsidiary of C-Technologies.

Ericsson is shaping the future of Mobile and Broadband Internet communications through its continuous technology leadership. Providing innovative solutions in more than 140 countries, Ericsson is helping to create the most powerful communication companies in the world.