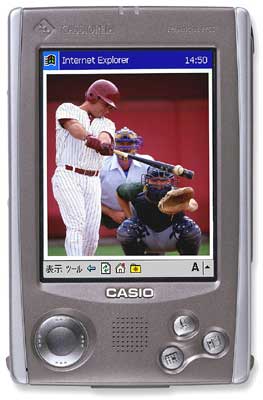 The E-750 features a MIPS VR4131 200 MHz processor, 32 MB ROM, 32 MB RAM and a 16-bit TFT display, along with a CompactFlash Type II slot. Aside from these hardware specs there are none too interesting new features in the E-750, so it looks like one could call it an upgraded and perhaps more professionally targeted PocketPC.

As usual with PocketPCs, it has the built-in speaker, the audio out jack and an IrDA 1.2 compliant IR port. Also common nowadays is the USB port, but there is also the unusual option of connecting a PDC or cdmaOne module to the serial port of the device, allowing it to use the device as a communicator. Unfortunately, Casio has not supplied any further details about the serial connectivity, so we’re left in the dark for now.