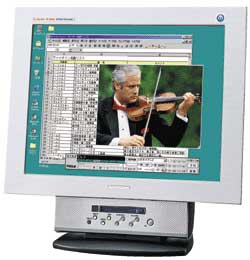 Sharp Corp. unveiled a 15-in. LCD monitor that would allow users to record TV programs on a USB-connected Windows 98/Me PC called the “LL-M1550A.”

The LCD monitor comes with a built-in TV tuner and MPEG2 encoder that has been designed to enable TV programs to be converted into video data and transmit the data to a PC. It can display 16.77 million colors with 1,024 x 7,680-dot resolution. Although it is open priced, Sharp said the retail price will be around $1200 USD. It is to be available from June 22.

When LL-M1550A is used with a PC, it would allow the users to stop the display on the screen while recording a TV program, and also “rewind” the recorded data to watch the program again. For instance, if a user has to leave during the program, the user can pause the display and watch the rest of it later when the user returns.

If users want to reserve a program for recording, they are able to search the program through the free Web site called the “ON TV JAPAN” and simply click the reserve button.