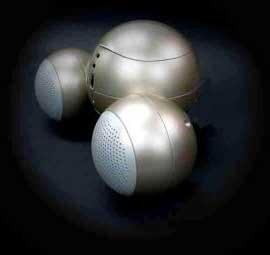 Cymo International has released a three-in-one MP3 player, the MPS-200, which consists of a portable MP3 player, an amplifier and two satellite speakers.

The model features 16M of memory that stores up to five songs. A smart card slot allows the memory to be expanded up to 64M. The main unit and the two attached speakers are spherical. The central sphere is an amplifier and a holder for the MP3 player. The other two are two 5W speakers. The housings are made of ABS plastic.