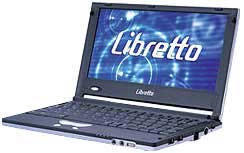 The Toshiba Libretto L1 is the most anticipated release of the millennium thus far. The newest model on the most famous subnotebook line of all time proves to be well worth the wait since the 1999 release of the Libretto 1100. A variety of new features and an impressive lineup of technical specifications propel the latest addition to the series into the category of a fully functional (and quite powerful) portable computer. Toshiba announced that the notebook would be available in Japan as of May 18th. Dynamism brings the Libretto L1, along with other next generation Japanese products, to customers in the U.S. today.

Weighing just 2.4 lbs, the Libretto L1 boasts a 600MHz Crusoe processor and the new Bluetooth wireless technology. Coupled with the Crusoe CPU, the L1 features a power-efficient 10” poly-silicon SXGA TFT Screen that enables the machine to run up to 14 hours using its enhanced battery. The display itself can handle up to an impressive 1280×600 max resolution, and uses 8MB of VRAM, essential for running an external monitor or projector (1600×1200 max. res.).

Not unlike its predecessor, the latest Libretto installment proves to be quite expandable. While the L1 ships with a standard 128MB of RAM and a 10-gigabyte Hard Drive, the machine can be configured with an impressive 256MB of RAM and a 30-gig Hard Drive, providing a level of storage and the ability to multitask that rivals many desktop models. An 18mm key pitch allows users to handle lengthy documents and e-mails effortlessly, while the entire footprint measures 10.5” wide x 6.6” deep x .81” thick.
The L1 is the most stylish Libretto ever, and features a plethora of technical innovations and groundbreaking technology, sure to make this the hottest notebook on the market.