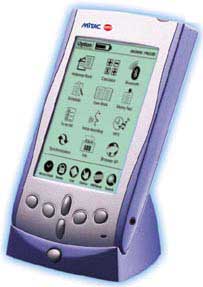 As small as 81(W)*130(H)*15(D) mm and as light as 140g, MiTAC Bluetooth PDA has the first Bluetooth built-in PDA module, pioneered in development of the integration of IA product and wireless solution technologies. By supporting Access Point, MiTAC Bluetooth PDA can be wirelessly linked to printers, notebooks, PCs, mobile phones and other networking communication equipment with built-in Bluetooth technology. Users do not have to pay for additional fees for wireless access to the Internet. The first Bluetooth enabled PDA with radio modules operating in the band at 2.4GHz will provide its users with efficient and easy, wireless and real-time access to the Internet at anytime anywhere.

In addition to its 8MB RAM, the most powerful and expandable MiTAC Bluetooth PDA is equipped with the standard NEC 66Mhz MIPS CPU and Compact Flash? Slot and most CF cards can be applied to expand its capacity.

MiTAC Bluetooth PDA is equipped with 4.1″ Color TFT TouchScreen with 240*320 resolution and Bright Backlight function. Any information displayed on TouchScreen can be read easily under any light and from any angle.

So small and so light, MiTAC Bluetooth PDA is designed to meet the demands of the current market for personalized IA (Information Appliance) products. This handheld machine is easy to use and set up. Additionally, its built-in 600mAh Li-Ion Battery has 30-day life span and is also rechargeable.

In addition to Personal Information Manager (PIM), via Ethernet and direct connection to PCs, users can get an unlimited access to the databases on the Internet or use TCP/IP to get connected to the Internet to receive and send emails, browse through WebPages and access to news groups. Moreover, MP3, Voice recording and Media Player also offer users alternative choices.

Linux OS with built in PIM software (including Address, Calculator, Schedule, Date Book, Memo Pad, To do list, Mail¡K) synchronized with PC enables MiTAC Bluetooth PDA to provide its users the most efficient and elegant style of time management. Its interface is also designed to meet all sorts of demands of different markets, such as markets of commercial services, finance, retailers etc. In addition, its synchronization with Outlook/Outlook Express and AvantGo Software online order enables users to read documents offline.

Name cards, addresses, to-do list, date book and so on can be transmitted via wireless Bluetooth and IrDa Scan to other PDA s equipped with Linux OS. If synchronized with added-on software, users can also transmit data via Bluetooth/IrDa to a printer that is also equipped with Bluetooth/IrDa to print out or remote control electronic appliance. “Customers have long recognized MITAC’s ability in system integration, application of wireless communication technology, and quality designs of user friendly and good stylish IT products. As a major integrated networking solution supplier, MiTAC is determined to take care of e-people’s e-needs and will keep devoting itself to the enchantment of integrated networking solution. MiTAC Bluetooth PDA appears to be a remarkable example of MiTAC ability in providing customers the most practical networking solution,” said Mr Francis Tsai, the Corporate President of MiTAC International Corp. MiTAC sincerely invites you to discover the magic e-power of MiTAC CAT Bluetooth PDA at its Booth C13 at Hall 13 from March 22 to 28, 2001 at Deutsche Messe AG in Hanover, Germany.