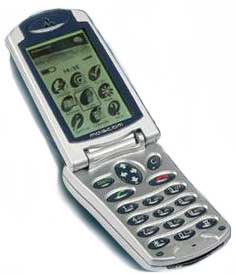 The MagCom mobile phone, developed in Norway and incorporating internet access and a personal digital assistant (PDA), has been launched by the company of the same name.

Aimed at the upper end of the market for hand-held mobile products, this device combines compact size, a weight as low as 157 grams and a big display in a very user-friendly solution.

MagCom has attracted great interest in the Norwegian media since the project was initially announced last April. Since then, the phone has been through extensive testing.

It is being produced by Flextronics in Denmark, which also makes telephones for Siemens, Nokia and Ericsson. The body is made at Tønsberg Magnesium south of Oslo.

“We have developed a product for users of both mobiles and PDAs,” explains MagCom president Lars Øberg. “They will now be able to get everything in a single unit.

“Along with ease of use, the MagCom phone has been created to generate as little radiation as possible. Users must feel not only that the technology works but also that we have taken account of health aspects.”

The company has accordingly opted to produce the body of the phone in magnesium, because this provides an elegant appearance while acting as a shield against radiation.

Tests carried out by Germany’s highly reputable IMST institute show that the MagCom phone gives off radiation with a measured SAR value of 0.043.

Many of the most popular mobile phones currently on the market have a SAR of more than one. The maximum limit in Europe is two SAR, while the USA has set a ceiling of 1.6 SAR.

The larger display will make it easy to write and read e-mail, and to utilise the internet. Using the smallest font size gives space for 27 lines of 44 characters each — equivalent to almost 1 200 characters.

With the Mag Synch function, users can synchronise the diary and address book with both Microsoft Outlook and Outlook Express.

Software can be upgraded by downloading from the MagCom net site, a service which the company is alone in offering to its customers.

The phone incorporates triple band functionality, which means that it can be used in all countries with a GSM network — the whole of Europe, much of the USA, Australia and Asia except Japan.

MagCom plans to produce 3 000 units per month initially, but this output will be increased later. Capacity is available to expand production sharply once the phone has been launched outside Norway.

Distribution agreements have been concluded by the company with all the major mobile phone dealers in Norway, including Mobildata, Nordialog and Commit.

MagCom is delivered with a standard battery which gives four hours of talk time and 110 hours on standby. Accessories include portable hands-free equipment and a portable mini-keyboard.

In addition come a carry case, tabletop and travel chargers, cable for synchronising with a PC, car installation set, lighter cable and a simple holder for permanent installation in car or boat.