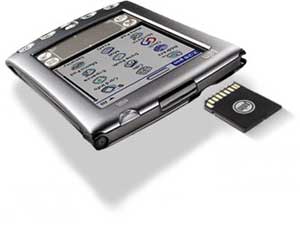 IBM intends to announce and ship new versions of its WorkPad, based on the m500 series handhelds, in the second quarter. Palm is an OEM for IBM WorkPads.

“We selected SD and MultiMediaCard technology for our expansion slot because its small size allows us to maintain the elegant, sleek form factor valued by our customers. Users can now easily carry additional memory, video clips, images, applications, games, backup capability and more,” said Byron Connell, vice president, Product Management and Planning, Palm, Inc. “Its adoption as a standard [by a broad variety of leading manufacturers], power efficiency, low cost, fast transfer rates and support for I/O make it the best choice for collaboration and sharing among Palm handhelds and other consumer electronics devices.”

In addition, Palm recognizes users want remote access to their corporate and personal data and has included Mobile Connectivity software with the m500 series handhelds. Using a compatible data-enabled mobile phone or modem, customers have wireless Internet access readily available for email and web content via their Internet Service Provider.

SD and MultiMediaCard media. The expansion cards, which range from 8MB to 256MB(2), can be easily carried and inserted in the expansion slot for instant access to applications, content, data storage and backup, images, video clips and more. Because of the broad acceptance of SD and MultiMediaCard media, the cards can be shared among a variety of consumer electronics products as well, such as printers, digital cameras and MP3 players.