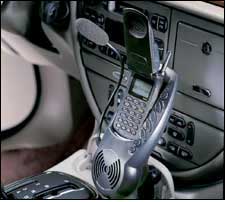 Imagine how convenient when calling in for messages — long messages with important phone numbers blurted out at the end! With Hear It Again™ memory, you’ll never have to listen to that long-winded voicemail more than once. Instead, record whatever it is you hear that’s worth saving and move on. During live phone conversations, same thing — if you hear a street or email address you need to note, simply press a button to capture the last 20 seconds; then press play to Hear It Again™ at anytime. Drivers shouldn’t have to make pen-and-paper notes!

Like a cockpit recorder, our new Car Cell Phone System continuously records cell phone calls in a 20-second loop; push one of four Hear It Again™ buttons and the current loop is flash-stored in digital memory. Four Hear It Again™ buttons make four distinct memos; a fifth button is a conventional but convenient forward recorder, for making a 30-second note to yourself. All memos are permanent until recorded over.

The Car Cell Phone System’s built-in 2 1/4-inch speaker and adjustable boom microphone offer superior sound clarity. When not in use, the system continuously and automatically charges your cell phone’s battery. Works with EarHugger® earpiece (SU001). Please specify one of two system models: for any Nokia model starting with 51 or 61, or for Motorola Star-Tac. One-year warranty. Created by Sharper Image Design.