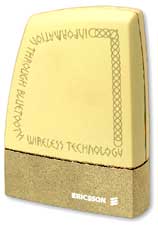 Ericsson Business Innovation launches an entirely new mobile communications concept, Bluetooth Local Infotainment Point, BLIP. With BLIP, the Internet moves onto the street and becomes local. BLIP is a stand-alone local platform, which communicates through Bluetooth technology, and enables users to gain access to information through their mobile phone, PDA or other mobile device. As more and more mobile phones and handheld devices are being equipped with Bluetooth, Ericsson believes that BLIP will catch on quickly.

“BLIP introduces a whole new dimension into mobile networks,” said Peter Lundin, managing director of venture BLIP at Ericsson Business Innovation. “By gearing communications to particular times and situations, we have created a platform for a range of new services. In only a few years’ time ‘blipping’ while on the move will be as common as home surfing is today.” Ericsson has initiated a number of partnerships to help it launch BLIP on the market. One idea is to place BLIPs in advertising panels. This would enable advertisers to use the panels as a direct channel for interactive communication with consumers. People who pass by would be able to ‘blip’ in to local pages to download discount coupons, test new products and watch video presentations, to mention a few examples.

“We see large opportunities, for example in public transports. Each line could provide information or gather feedback from the passengers through BLIP. One of BLIP’s greatest assets is that it is free of charge for the end user. That is why we think it will soon become widespread, says Peter Lundin. BLIP will be launched globally in 2001. Apart from selling the actual hardware, the company also intends to develop content solutions, both in-house and through third-party developers. In order to rapidly increase the number of available applications, the software platform will be open to
external developers.