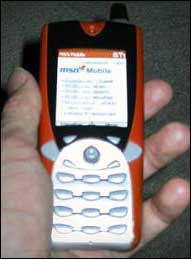 Enter the Stinger and the Stirling — those are the code names Microsoft has given to its first series of smart phones and the platform that runs them.

These devices will be ready for the next generation of cellular service in this country (called 2.5G) and in Europe (3G).

Stinger will be 30 percent smaller than an average phone in Europe or the United States; will weigh less than 100 grams; have a color or gray-scale display (up to 208 by 240 pixels); and provide up to 100 hours of standby time with the screen and PIM (personal information management) functions running, four hours of talk time, selectable ring tones, foreign-language support, 8MB of built-in memory and support for a wide range of expansion options including Secure Digital, Solid State Floppy Disk Cards and even memory sticks.

All of this is meant to be controlled with one hand — a few buttons and a joystick is right on the front of the phone.

Stirling is being targeted as a lower-end device. It’s meant to be an OS-independent solution — which means manufacturers can use whichever cellular phone operating system they wish and still reap the benefits of what’s been created for Stinger — the not-so-secret weapon, a mini-browser.

The heart of the system is Mobile Explorer 3.0. If that sounds a lot like what’s inside the current crop of Pocket PCs — that’s because it is what’s inside Pocket PCs. In addition to what it currently does, the Stinger’s ME3 will also be able to resolve WAP 2.0 (WML), HTML, cHTML, JScript, XML and for all I know, maybe even XFL!