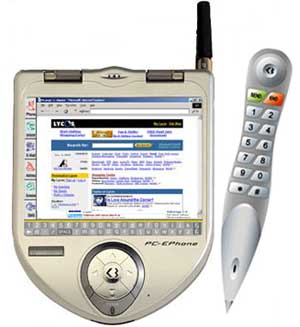 PC-EPhone, Inc. is pleased to announce that it has signed a three-way agreement with Cyberbank Corp. and FutureCom Global, Inc. which confirms and secures the position of the PC-EPhone product, the world’s first commercial wireless convergence device. FutureCom, the exclusive subdistribution and marketing partner of PC-EPhone, agrees to order 70,000 units of PC-EPhone valued at approximately US$50 million for delivery in the second quarter of 2001. Financing for this order is forthcoming and will be arranged by FutureCom by way of a Standby Letter of Credit with several international bankers including Swiss Capital Partner.

“We are proud of the unique and world-class PC-EPhone product that Cyberbank has developed and we are confident that we can sell a minimum of 1,000,000 PC-EPhones in the next 12 months,” says Ron Kelly, president and CEO of FutureCom.

The Company is also pleased to announce that it has agreed to be worldwide co-applicants for the trademark of “PC-EPhone”. “We are very excited that Cyberbank has adopted the name ‘PC-EPhone’ for its worldwide marketing efforts,” says Douglas Yee, president of PC-EPhone.

The PC-EPhone is the world’s first wireless convergent device that combines a personal computer with full internet access, a cell phone, a PDA and organizer all-in-one. Named runner-up for the Best of Comdex award in November 2000, Cyberbank’s PC-EPhone product is truly a world-class product. The PC-EPhone product will be manufactured by Samsung Electronics beginning in March 2001.